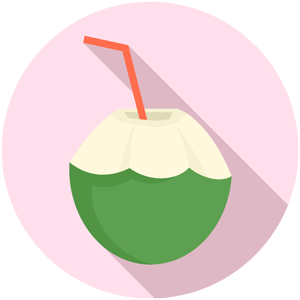 Why do we love coconuts

Considered a fruit, a nut, and a seed (though technically in the drupe family), the coconut is one of those addicting foods that you can never get enough of. The palm is also called the “Tree of Life” because every single part of the plant can be used to make everything from milk to musical instruments. It’s a good thing the coconut lives up to its weighty name, providing the world with delicious retreats into coconut-food heaven. Here’s the low-down on the health benefits, how to bake up delicious coconut cake, and whip up beauty applications, and why everyone is obsessing over this fuzzy, brown food.

Coconut water is getting more grocery attention, and not only at the health-food stores. The refreshing drink comes from young, green coconuts and has been touted as electrolyte-packed and a great sub-in for mainstream sports drinks such as Gatorade. For instance, Zico Coconut water has 61 milligrams of potassium compared to the 3.75 in Gatorade, although the coconut water does have about 8 milligrams less sodium per ounce. VN Food Editor Jennifer Chen tries to drink coconut water as much as possible, especially when she’s running. “It’s more hydrating than water and tastes better than mainstream sports drinks to me,” she says. For the avid athletes out there, or just those who hate being dehydrated (hopefully everyone), coconut water is an excellent staple to carry along wherever you go.

Not exactly the angel of the fat world, coconut oil and butter have gone through a rollercoaster ride of reputations. Now it’s back on top, mainly because scientists are backtracking on previous accusations against it. In terms of the controversial health benefits, it’s now clear that most studies on coconut oil were done on partially hydrogenated versions. Those are definitely cholesterol raisers, but virgin coconut oil is a different story. First of all, the partially hydrogenated coconut oils have trans fat, a well-known evil in the food world. Virgin coconut butter and oil have plenty of saturated fat, but it’s actually a fairly healthy type of it—something called lauric acid. Lauric acid has been shown to increase levels of good cholesterols, and lower the bad. While it may not be as beneficial as olive oil (and you probably shouldn’t be eating it in large quantities), coconut butter offers a delicious alternative. Plus, vegans are in love. And why wouldn’t we be when coconut butter makes cakes go from crumbly and dry to soft and luscious? Coconut oil also has a natural sweetness that adds an unmistakable flavour to baked goods, along with stir-fries (try subbing it in Thai stir-fry) and sautés.

If you haven’t yet tried coconut milk already, head to the store stat for this dairy substitute. Just remember there are two types: one made to drink straight up (try So Delicious’ or Silk’s versions) and one to cook with, which usually comes in a can. The former is thinner and far more diluted with water, and often supplemented with vitamins and folic acid. Compared to dairy milk, coconut milk has fewer calories and sugar, comparable calcium and fat, but no cholesterol. Overall verdict? It’s healthier and tastier. Companies are also creating coconut-milk based products such as Coconut Bliss ice cream. If you want to make an amazing Thai curry, grab the can and check out our curry compilation for some tasty recipes.

Even though this is not directly food-related, coconut is also a beneficial ingredient in natural beauty products. Apply coconut oil directly on your skin and massage it in as a moisturizer, or mix equal parts castor oil with equal parts coconut oil to use as a facial cleanser. Want to make your own deodorant for the upcoming summer months?

Whether it’s for drinking, cooking, or making your skin glow, coconuts are tasty and easy to incorporate into your daily routine. Here at Cococut, we’ll take coconut in any form we can get!